The Israeli-Palestinian Memorial Day reminds everyone that war is not a predetermined fate, but only a human choice

The joint ceremony seeks to sow the seeds of hope among the two sides, and to bring to an end wars that have taken the lives of our cherished loved ones

The Israeli-Palestinian Memorial Day reminds everyone that war is not a predetermined fate, but only a human choice. The ceremony takes place every year on the eve of Memorial Day for Israeli fallen soldiers and victims of terrorism. The ceremony was initiated by Buma Inbar, whose son was killed in Lebanon in 1995, and other peace activists, together with the Combatants For Peace movement. For some years the PCFF has joined in organising and producing the event, and it is now a full collaboration between the PCFF and the CFP movement.

Since the first ceremony, in 2006, the number of people who attend has gradually grown, and today counts thousands of people, bereaved Israeli and Palestinian family members. The choice to hold the event on the same day as Israel’s Memorial Day, aims to relay a message to both sides, calling them to recognize the joint pain and hope, and to try and prevent the next victims from this fate.

Throughout the years, participating guests included leading intellectuals, among them musician Yoni Rechter, Israel Prize winner Professor Yehuda (Judd) Ne’eman, singers Alon Oleartchik, Achinoam Nini and Mira Awad, Professor Eva Illouz, journalist Eliezer Yaari, Dr. Amal Abu Said, the author David Grossman, the author and Doctor Sami Shalom Shitrit and others. The event has a growing media exposure. In recent years, we have had to deal with demonstrations and attempts of right-wing politicians and people to quash the event.

The 15th Israeli-Palestinian Memorial Day Ceremony took place on April 27, 2020 and it was unlike any ceremony we have ever had. Due to the global COVID-19 pandemic, this is the first time we couldn’t physically unite with one another and with our many supporters who arrive in droves each year.
This new situation forced us to adapt the ceremony to the new reality. We transformed it into an online ceremony that was broadcast on several platforms to the entire world.  This was in fact an Internet project the size of which we had never taken on. It was a major challenge for all who worked day and night to adhere to the task.

No doubt the new situation spared us the anguish we confront on a yearly basis, from finding a venue to host the event, routinely struggling with the defense ministry that refuses to provide entry permits to our Palestinian partners, to witnessing disgraceful right-wing protests outside the venue.
Yet, there was some commotion when this year, for the first time, a public service announcement inviting the public to watch the ceremony, was broadcast on Public Broadcasting Corporation radio.  Undoubtedly a welcome precedent for us, but it was denounced by the minister of communications and other Knesset members who were enraged that the Corporation, supported by public funds, publicized the ceremony.

To our delight, despite the physical distance and the inability to unite (which was markedly conspicuous), the ceremony this year was one of the most moving we have organized so far. During the ceremony we heard from Hagai Yoel, Tal Kfir Schurr, Yusra Mahfoud and Yakub al Rabi, who shared the stories of their personal loss and called for reconciliation and peace. Other people who took part in the ceremony were Nickolay Mladenov, UN Special Coordinator for the Middle East Peace Process, with a recorded greeting, and intellectual, author and poet Dr. Sami Shalom Chetrit.
Artistic performances included Achinoam Nini and Gil Dor, Mira Awad, Eli Magan and Adi Rennert and of course the Rana Choir, which, as it does every year, ended the ceremony with the song “Chad Gadya” (One Little Goat). Other participants were Liora Rivlin and Makram Khoury who read from the letters of Hanoch Levin.

The ceremony was watched by an audience that peaked at 193,000. We know for sure that it was viewed by over 1,000 viewers in Gaza, tens of thousands of viewers in the West Bank and the rest in Israel, Europe, Australia, the USA; in fact, all around the world.
This year Hanoch Piven designed the official poster for the ceremony and the animation that accompanied the broadcast.

The evening ended with special Zoom encounters between Forum members and the public. During each of the ten encounters Forum members told their personal story of bereavement, shared the process whereby they opted for reconciliation and answered the viewers’ questions. These encounters added so much to the unique evening and we would be delighted to repeat them in the future. 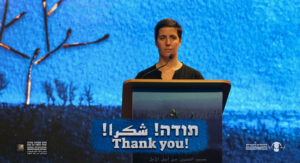 The 14th Israeli-Palestinian Memorial Day Ceremony was held on May 7, 2019, with the theme of “sharing sorrow, bringing hope”. Following the success of the event last year, and the difficulty to find a closed space that would be large enough to accommodate us, once again the event was held outdoors in Yarkon Park. Over 9,000 people came to remember the pain and the hope together.

At the 2019 ceremony we were honored by the presence of Mrs. Leah Shakdiel, a social activist working towards peace and justice. In her speech, Leah said: “Memorial Day is when I realize that the way in which I acknowledge the pain for the fallen from my own people, necessarily expresses my dreams for our national future. We share our pain of bereavement with the other side, listen to their pain of bereavement, so that we can also share the joy of life and growth and peace, of equal human beings and equal citizens, of two peoples in one land, proud of their separate national heritage, and determined to realize their dreams together.”

On 2019 we were once again in need of assistance in order to cover the high costs of the event. Thankfully, many who believe in our path agreed to support and contribute as part of the special crowd funding campaign that we initiated. We thank each and every one of you.Unfortunately, once again the request that we submitted to the Ministry of Defense, for the entry of the Palestinian Forum members to Israel and for their participation with us in the event, was refused by the Minister of Defense and Prime Minister Benjamin Netanyahu. Thanks to Adv. Gaby Lasky of the Association for Civil Rights in Israel and to the attentive judges of the High Court of Justice, we won the petition once again. About one hundred Palestinian members of the Forum and of Combatants for Peace were allowed to participate with us in the event (and upon their arrival they were greeted with a meal to break the Ramadan fast). The judges even went so far as to say: “The Minister of Defense must not interfere with the way in which a family wishes to express its own bereavement, pain and grief over the untimely passing of its beloved. The petitioners before us bring together bereaved families who have chosen to express their pain and commemorate their loved ones in a joint ceremony. We should not interfere with their choice.” We all hope that these words will penetrate the hearts of all those who seek to violate our right to hold the ceremony, and that we will no longer witness the violent protests against us outside the compound of the event.

The 13th Israeli-Palestinian Memorial Day ceremony was held, outdoors for the first time, at Ganei Yehoshua (The Yarkon Park) on 17 April 2018. The ceremony, observed the theme “Remembering our Future Together”. It was attended by 7,000 Israelis and Palestinians, who sought to remember and connect together, in pain and hope.

Among 2018 speakers, we were privileged to listen to words, spoken in great pain, from Dr. Amal Abu Said, widow of Yaqoub Abu al-Qiyan, as well as heart breaking words from Israel Prize laureate, author David Grossman. He announced from the podium that he intends to donate part his prize award to the PCFF. Other speakers included Forum members Maha Salah, Adi Chernobroda Cahlon, Jihad Zghayar and Yuval Roth.
On 2018, more than ever before, we faced many obstacles in the production of this event. Following violent activities outside the ceremony hall last year, we struggled to find a place which would agree to host us. Fortunately, with the help of friends and supporters of the event, we were able to obtain permission to hold the event at Ganei Yehoshua in Tel Aviv.
Moving the ceremony outdoors contributed greatly to the atmosphere and to our ability to accommodate the crowds of people who attended the event. However, this demanded greater financial resources than in the past. In order to cover the costs of the event we embarked on a crowdfunding campaign whose outcome exceeded all our expectations. We were so moved by people’s willingness to contribute financially in order to make this event happen.
Unfortunately, on 2018 too, there were many obstacles created by people who wished to sabotage the event. Our application to the Ministry of Defense to allow Palestinian Forum members to enter Israel in order to take part in this event with us was denied by Defense Minister Avigdor Lieberman on the grounds that it exhibits “bad taste”. Our attorney Gaby Lasky challenged the Defense Minister’s decision in the Supreme Court. Following the hearing on the morning of the day of the event, we won our petition and the court instructed the Ministry of Defense to approve our application.
In addition, many activists from the right, headed by Yoav Elias (“the shadow”) and Itamar Ben Gvir gathered this year, as well, outside the venue try and sabotage the event. Police forces oversaw a separation between demonstrators and event-participants, and we were able to complete the evening without them disturbing us.
Thus we were able to hold the event together, Israelis and Palestinians, united and stronger than ever.

Watch the trailer of the 2018 ceremony

In 2017, a record number of 4,000 people filled the Tel Aviv hall, while hundreds more were left outside the venue. More than 600 people took part in a parallel event in Beit Jala, Palestine. Additional events were held in Kiryat Tivon and around the world: Berlin, Switzerland, USA, UK and more.
The event in 2017 received a lot of media attention, because the permits of the Palestinians to enter Israel were refused the Minister of Defense, Avigdor Liberman, on the days that preceded the ceremony, and after there were vigorous right-winged protests, led by Yoav Eliassi (“The Shadow”), Itamar Ben-Gvir, Michael Ben-Ari and others.

The four PCFF members who spoke at the 2017 Memorial Ceremony